Colorado Kite Sports
Editors note:  I originally wrote this in January 2021 and am posting it here with some minor edits.  I'll get to doing a more comprehensive review later, but interest is growing in this kite [for good reason!], and I feel like this might be helpful for some.  Enoy!

So I've been getting some time on the Gin Spirit and thought I would share some 1st impressions.I ended up having a pretty fun moonlight session last night on in some light but steady ~8 kt winds. As you might imagine, not a whole lot of pictures from that session, but it was fun and felt like the 1st time where I was really starting to see some of the behaviors of the kite.
​
I guess maybe I'll start with some pictures and more general design features. The construction is pretty technical with all the bells and whistles of similar kites in this category like the FS Soul - things like leading-edge stiffeners the entire leading edge, spanwise load strips, etc. The inlets are highly formed and made for gulping air as you can see in the pic below. This does lead to a very quick inflation. It uses a velcro deflate valve located on the center trailing edge, and rather than having velcro dirt-outs at the tips, it just has a permanent small exit hole there. 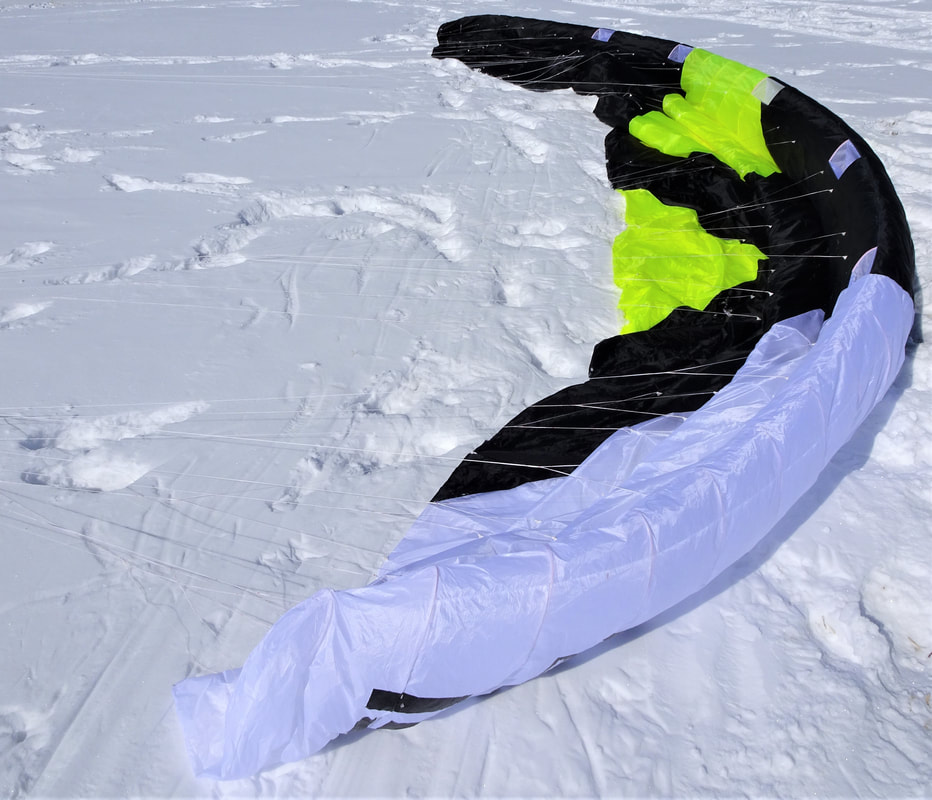 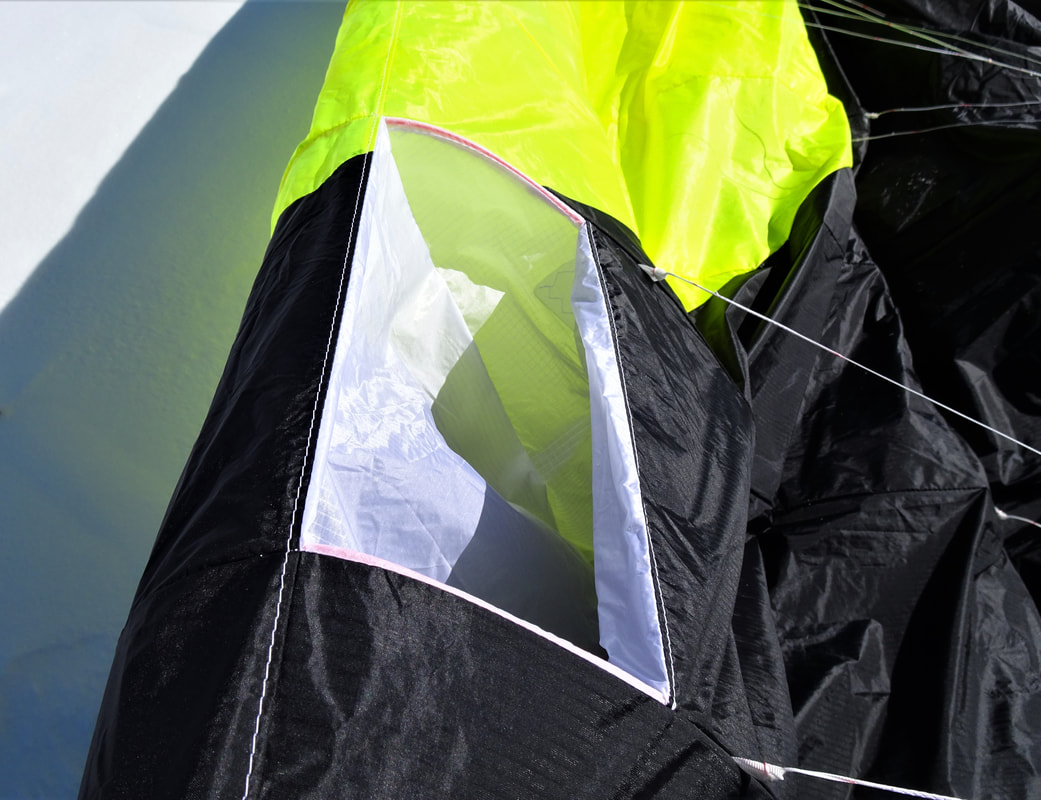 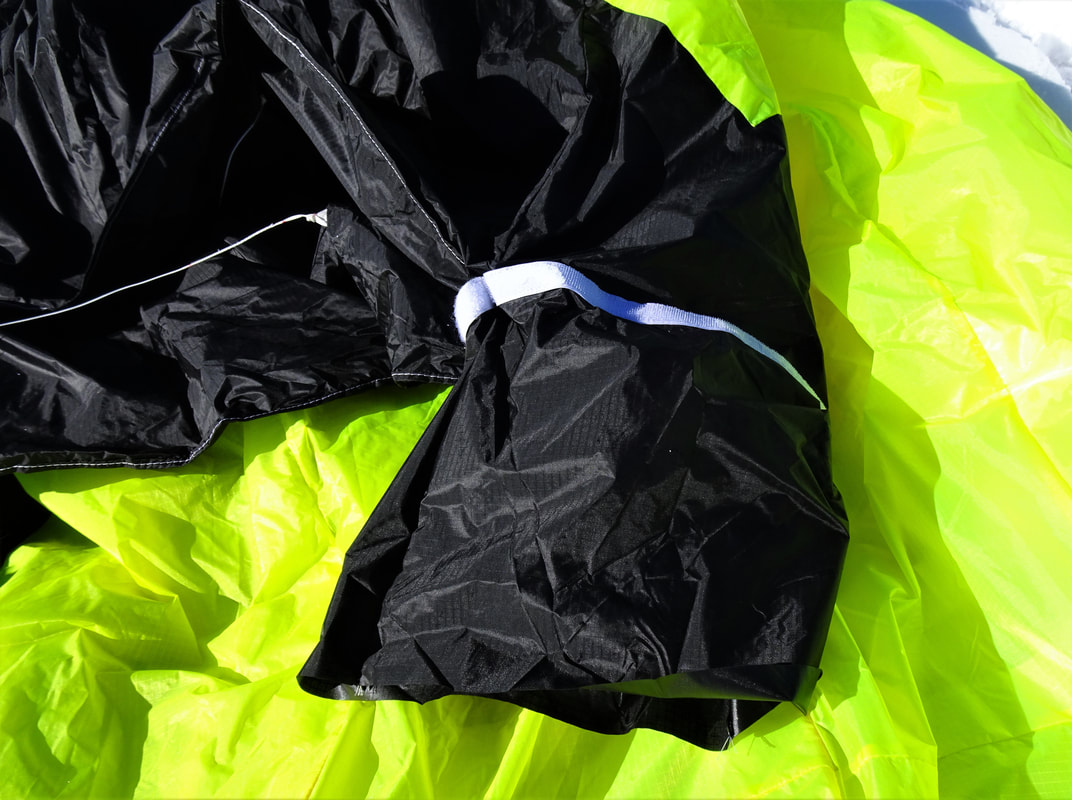 Built-in water draining holes (blows out snow too) are small but permanently open: 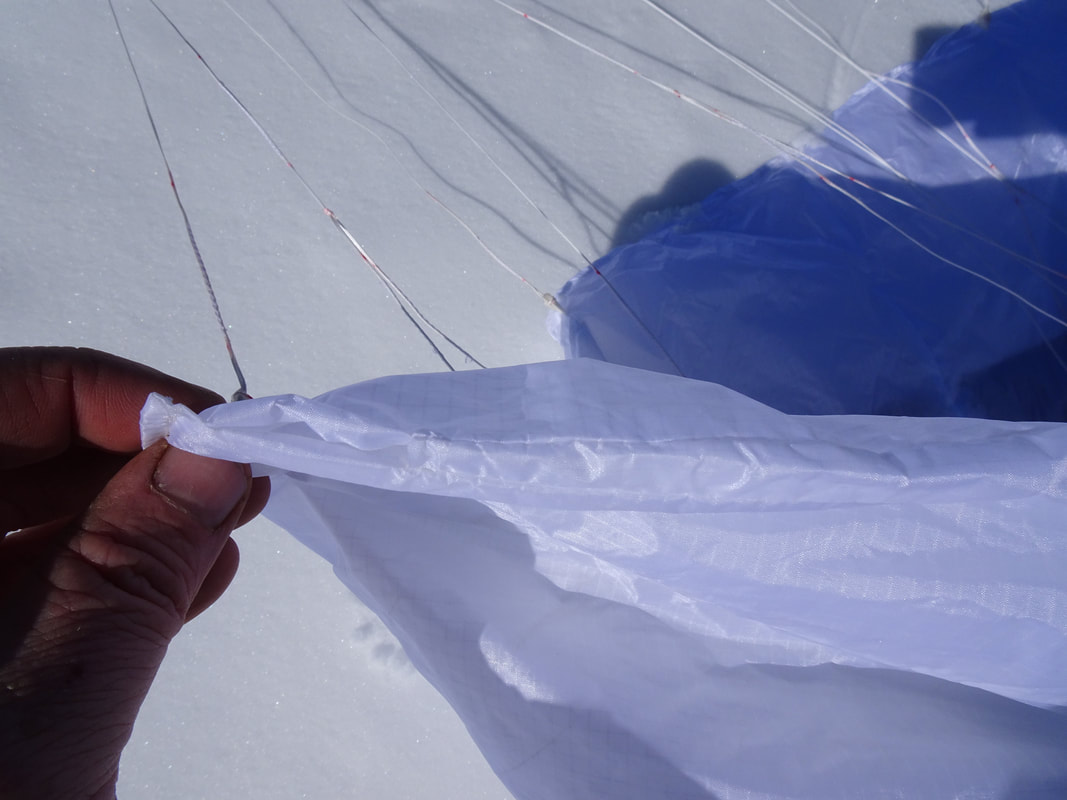 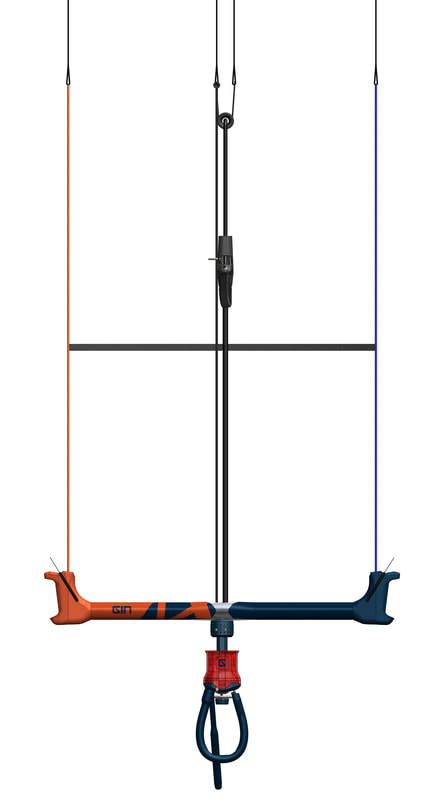 Weight of the 15m Spirit is 2.38 kg which puts in in between 2.17 kg for a 15m Matrixx and 2.45 kg for a 16m Empulse by comparison, and in the lite category, maybe not UL. I don't know the exact materials used in the Spirit, but these weight figures lead me to believe they are using a mix of 20D and 30D fabrics, and that things like LE stiffeners and higher cell count make for the slight extra weight over the ones mentioned.

I'm going to go ahead and base my comparisons to the other closed cell kite I currently have the most experience with, the Little Cloud Pelican 2. While I realize not a ton of people have had a chance to fly either of these kites, I've found myself thinking a lot about their differences and it opens up conversation to much bigger ideas such as performance, what defines a "good" kite, and design intent. Hopefully later on people who have access to other kites such as the Hyperlink, Chrono and Soul can add their perspectives and round out the conversation.

First Impressions: I'll start off by saying expectations for this kite were very high, and it has not let me down. Like all the other kite brands that are descendants of paraglider companies, quality is absolutely top-notch. Handling characteristics too, are excellent. As mentioned, the kite inflates very quickly. It also keeps its shape really well once inflated, and is quite stable. You can get some very slight tip-tucking on a really hard turn, but it pops out quickly once you exit. Bar pressures are pretty light and responsive, just overall a very solid feel, and a kite that makes you feel at home right away, with no weird tendencies.

In really light winds - say sub 6kts - I think other kites like the Pelican might do a slightly better job at hanging out and waiting for the next puff of wind. The Spirit, being slightly heavier and having a cleaner leading edge, creates a stronger surge with more inertia and less drag; this means that in really light inconsistent winds the Spirit will have a greater tendency to overshoot and may need to be  checked and redirected a bit more proactively if the winds are not steady.  But lets face it sub-6kts isn't really useful wind anyway unless you're skiing on a pretty hard surface, and once winds pick up a bit more, it becomes obvious that the Spirit is the more powerful kite out of those mentioned.

There Spirit definitely has some lift - I would say it is most comparable to the HQ Zeekai out of any of the previous kites I've flown. Maybe a little sharper pop with not quite as much glide as the Zeekai. But that kind of makes sense as the Spirit is a 15m and Zeekai I have is is a 16m. The surge, or Pop, is also stronger than probably any other kite I've flown. While I've only had a chance to test in light winds, the lift varies considerably with increases in wind and speed, and I was able to eek out some pretty nice jumps even with only 8-10kts of wind last night. Everything I've seen so far, and everything I'ver heard about the smaller sizes - is that these are going to be Big Air machines. I'm not a great jumper, but it does make it quite effortless. But to consider the Spirit as being a better-handling, more stable version of the Zeekai is a pretty big compliment in my books. The Zeekai has always been one of my favorite kites for light winds - just because it can develop so much lift at low speeds - and now with the Spirit, I think you have a kite that is a little easier to handle and will have a wider range of use for the average rider.

Other characteristics that are standing out: It sits quite far forward in the wind window and I believe it is going to be pretty efficient. In a really tight, powered turn with the bar pulled all the way back, you can choke it - kind of like a muted version of the Gin Shaman3.  At that point it will stop pulling and make a quick pinwheel turn. Once you push the bar forward, it exits with a nice boost of power. The turns do not feel as powered and as carving as say the LC Pelican (more on this later).  It holds air really well and has a really solid feel in the air; the reverse launch is also really easy - all kind of the things you'd expect from a high-end kite.

So which kite is better?
Probably the one thing that stands out the most after testing the Spirit against other kites like the Little Cloud Pelican - is this whole question of what makes a good kite, and what makes one better than another.  When comparing the Spirit to the Pelican, one thing became very clear: these are two very capable kites, but were designed with significantly different sets of goals and objectives in mind. Interestingly, at the surface level it might seem like the kite designs are the same: both are closed-cell, designed to excel at foilboarding as well as snowkiting. Once you get beyond that, things diverge. The Spirit was designed with Big Air clearly being a top criteria - a kite that is going to be massively fun for mountain boarders, freestylers and water fanatics.  With the Pelican on the other hand it's obvious that top criteria was the widest range of use with a heavier emphasis on back-country mountain performance. The result is two markedly different kites, each excellent at what it was designed for.

I'll offer up a couple talking points as kind for what I'm talking about, and the resulting differences in design.

1. Wing curvature
One of Tom Bourdeau's signature design features that is evident in kites such as the Pelican, Empulse and all Montana versions since the M8 - is a pretty radical curvature and C-shape to the planform. The Spirit has a much flatter curve than the Pelican. This gives the Spirit better lift and boosting ability. What the higher C-shape of the Pelican does is make for a quick-turning kite with a more powered, carving-type turn. This becomes important for a kite that is designed to spend a lot of time looping and pulling a person up a mountain. Tight, powered loops are really important on steep slopes where you need lots of power continuously and your available wind window is compressed by the sloping terrain.

The different power these two kites produce in the turn ended up being more noticeable than I was expecting. On the Pelican, as you loop the kite the power stays near-constant and you almost get this kind of satellite/slingshot effect. So far the feeling that I've got on the Spirit  is that the power falls off  during the turn but builds very nicely on the exit. Any disadvantage in this regard on the Spirit is repurposed as overall improved lift and Pop.


2. To Stiffen or Not to Stiffen
The Gin Spirit has a much more technical leading edge than the LC Pelican, with stiffeners that go the entire span. This creates a really clean leading edge profile. Once the kite decides to grab, it moves very quickly through the wind window, developing lots of lift quickly. This translates into a meaty surge of lift and good Pop - exactly the sort of thing you are looking for in a Big Air kite.

The Pelican on the other hand has no stiffeners. This has been an intentional choice by the designer for years now, and it does a couple of things. First, it makes it really easy to pack the kite away with very little fuss. It makes the kite lighter, smaller, more stuff-able since you don't have to worry about deformation or damage to the battens. The other thing it does is offer some inherent stability and overshoot prevention to the kite. As the kite gets close to the edge of the wind window, it tends to lose a bit of internal pressure and the leading edge deforms a bit. This deformation decreases lift and increases drag - making it harder for the kite to overshoot. All this does of course come at the expense of some Pop performance - but if you are designing a mountain kite, you might be ok with that. In fact, you might actually want that.

I can tell that I am going to really like the Pop and performance of the Spirit; with that said, it is not a kite I see myself taking into the mountains as much. Between the nicely formed battens that I am just a little more nervous about warping, and the more agressive lift of the kite - it has me a little more on edge in really gusty conditions. Keep in mind this has nothing to do with stability. The Spirit is a very stable kite. In some ways, it may be more stable and rigid than the Pelican. But stability doesn't always equate to comfortability. There is something about the smooth, slightly more muted power delivery of the Pelican that leaves me feeling very comfortable in gusts. Even after getting schwacked and having the kite fold up, rarely do I worry about the surge when it re-opens - it just feels really controllable and like it doesn't want to kill you.  For the same sort of wind, I'm pretty sure I'd find myself punching the safety on the Spirit, or risk doing the Superman as the kite unfolds with a monsterous surge.

But this same agressive power spike on the Spirit is going to be exactly what makes it more desirable for others. While the Pelican has some really nice float, the Spirit is clearly the better boosting kite of the two.

So which is the better kite? The answer is, it really depends on what you are looking for. The perfect person for the LC Pelican is someone who wants a kite that they can use on water, has some fun lift and float, but that also performs really, really well for back-country skin-ins and technical tours. The Spirit on the other hand is going to be great for the person who does mostly Park-and-Ride snowkite riding, and who loves sending it and going big wherever they are - land or water. Both really great kites for slightly different tastes.

Anyhoo - just some first impressions and thoughts - hopefully, that is helpful to someone.
info@coloradokitesports.com